12" x 20" Photograph of Darrow at Banquet Honoring Steffens [with].. 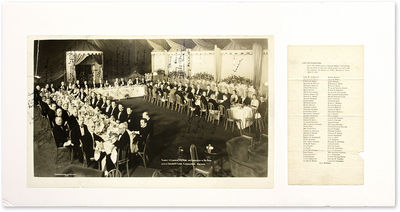 by Darrow, Clarence; Steffens, Lincoln; Filene Edward
1935. Darrow at Banquet in Honor Of Lincoln Steffens. Darrow at Banquet in Honor Of Lincoln Steffens. Darrow Attends a Banquet in Honor Of Lincoln Steffens [Darrow, Clarence (1857-1938)]. [Steffens, Lincoln (1866-1936)]. [12" x 20" Photograph of a Banquet Honoring Steffens, Party Includes Clarence and Ruby Darrow] New York: Standard Flashlight Company, 27 April 1931. [With] [11" x 6" Printed List of People Who Attended the Banquet]. [And] Darrow, Clarence. [Filene, Edward A. (1860-1937)]. [Autograph Letter, Signed, To Filene, On the Letterhead of the Murray Hill Hotel, New York, New York, April 17, 1931]. Single 9-1/2" x 6" sheet. Some edgewear to photo, upper left corner of image repaired, light toning and fold lines to list, early annotations to photograph, a few chips and nicks to edges of both. Items mounted on 16" x 32" foam-core board. Letter, which is not mounted, has some toning, two horizontal fold lines, a few light pencil lines (offsetting from another document) and glue residue to verso, probably from mounting in an album, otherwise fine. Three items in all. $1,750. * There are two captions at the foot of the image. One identifies the photography company, the other reads "Dinner to Lincoln Steffens and Characters in His Book Given by Edward A. Filene. Ritz Carlton Hotel April 27, 1931." The list, which includes several media people, social reformers and reform-minded politicians, such as Ida Tarbell and Bernard Baruch, is captioned: "Cast of Characters from "The Autobiography of Lincoln Steffens" and from his next book, present at the dinner given to the author and his characters by Edward A. Filene, Ritz-Carlton Hotel, April 27, 1931." Some of the attendees are identified in a contemporary hand. Darrow is seated at the center of the main table next to Steffens; Ruby Darrow is sitting at the right end. Darrow, in his letter, thanks Filene for the invitation to the event, "which I am very glad to accept" and adds: "Mrs. Darrow is here with me. May I bring her along?" This late request may be the reason why Ruby Darrow is seated several places away from Clarence. (Inventory #: 62205)
$1,750.00 add to cart or Buy Direct from
Lawbook Exchange
Share this item

All items are offered subject to prior sale. We are happy to accept orders by telephone, fax, e-mail or through our website. We welcome visitors, although an advance contact is advised. Our office hours are: Monday through Friday from 10 AM to 6 PM. Terms: Appropriate sales tax will be added for residents of New Jersey. Foreign remittances must be in U.S. dollars, by check drawn on a U.S. bank, by international money order, or by wire transfer. We accept Visa, MasterCard, Discover Card and American Express credit cards. Shipping Charges: Will be applied to all orders. Domestic orders will be shipped via either Federal Express Ground Service or United Parcel Service, unless we receive other instructions. All overseas orders will be shipped via Federal Express, or USPS Air Service. All books are packed with requisite care. Warranty & Returns: Any item may be returned within fourteen (14) days of receipt for any reason; prior notification is necessary and returned items must be carefully packed and arrive safely. On-Line Catalogues: Our latest catalogues, some featuring specific subjects and special offers, can be viewed on our website. We purchase books on topics similar to those which appear in our inventory, and appreciate offers of either single items or whole collections.
More from this seller

The Trial of "Bill Burn," Under Martin's Act

1829
(click for more details about The Trial of "Bill Burn," Under Martin's Act)

by Manuscript; Elsynge, Henry (The Elder)

1630
(click for more details about Modus Tenendi Parliamentu[m], In Two Bookes, Composed by Henry Elsing)
View all from this seller>