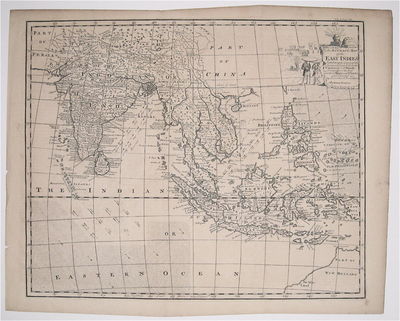 by BOWEN, Emanuel
London: Bowen, Emanuel. unbound. Map. Uncolored Engraving. Image measures 14 1/2" x 17 3/4". This elaborate map of the East Indies extends from Australia, the Philippines and the Carolines in the east to India, the Malvdives and Afganistan in the West. The index includes towns and geographic features such as mountains, rivers, and islands. In addition, the map also features information about trade winds in the Indian Ocean and South China Sea. The coast of early Australia, labeled here as New Holland, appears in the lower left corner. Above in the upper right corner is a decorative figured cartouche displaying the title. This map appeared in John Harris's "Navigantium atque Itinerantium Bibliotheca," or "A Complete Collection of Voyages and Travels." It is in good condition with some offsetting, as well as minor chips and tears to the margins. Emanuel Bowen (1714-1767) was an English map engraver who served as Royal Mapmaker to George II of England and Louis XV of France. He was well-regarded for his large, detailed, accurate, and overall attractive maps. This map is a lovely look at the expansion of geographic and scientific knowledge that occurred in the colonial era. (Inventory #: 234164)
$550.00 add to cart or Buy Direct from
Argosy Book Store
Share this item

All items are offered net, subject to prior sale. Returns accepted within 7 days of receipt--please contact us first. Payment by Visa , Mastercard & American Express. Appropriate sales tax will be added for all N.Y. State residents
More from this seller

Street in Manilla After a Shower; Chinese Nurses on the Promenade at Manilla

New York : Harper's Weekly , 1857
(click for more details about Street in Manilla After a Shower; Chinese Nurses on the Promenade at Manilla)

New York : Harper's Weekly , 1857
(click for more details about Girls Shopping at Manilla)
View all from this seller>