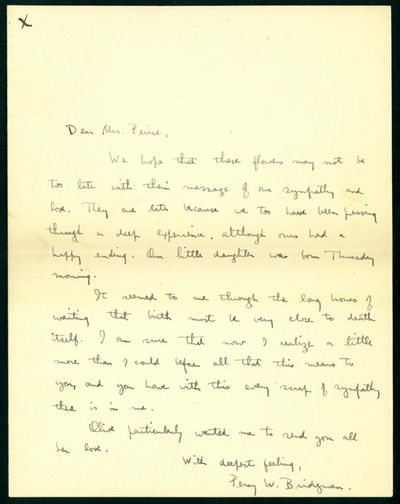 by Bridgman, Percy W.
1926. Bridgman, Percy Williams (1881-1961). (1) Autograph letter signed to Mrs. Benjamin Osgood Peirce. N.p., n.d. [ca. January 1914]. 1 page plus integral blank. 175 x 139 mm. (2) Autograph letter signed to Mrs. Peirce. Cambridge, Mass., October 3, 1926. 1 sheet, on letterhead of Harvard University's Jefferson Physical Laboratory. 268 x 204 mm. Together 2 items. Tiny marginal tears in 1926 letter, but both letters fine otherwise. From American physicist and philosopher of science Percy W. Bridgman, professor of physics at Harvard and winner of the 1946 Nobel Prize for his discoveries made in the field of high pressure physics, to the widow of American mathematician Benjamin Osgood Peirce (1854-1914). Peirce, author of the influential textbook Elements of the Theory of Newtonian Potential Function (1886), was instrumental in developing the teaching of mathematical physics at Harvard. Bridgman, who obtained his PhD. in physics at Harvard in 1908 and was appointed an instructor in physics by the university in 1910, would have known Peirce both as a student and as a fellow faculty member. Bridgman's first letter to Mrs. Peirce, written shortly after Peirce's death on January 14, 1914, expresses his condolences in almost poetic fashion: "We hope that these flowers may not be too late with their message of our sympathy and love. They are late because we too have been passing through a deep experience, although ours had a happy ending. Our little daughter [Jane Bridgman] was born Thursday morning. It seemed to me through the long hours of waiting that birth must be very close to death itself. I am sure that now I realize a little more than I could before all that this means to you . . ." In his second letter, written twelve years later, Bridgman thanks Mrs. Peirce for sending him Peirce's Mathematical and Physical Papers 1903-1913 (1926), which had recently been published: "This is to thank you and to let you know how highly I shall prize the collection of Professor Peirce's papers which you have just sent me. You would be surprised if you knew how many times I think of Professor Peirce as I go about the Laboratory, or as I prepare my lectures in the courses which were once his; the influence which he had I shall never forget. . . . " In 1926 Bridgman had just been appointed to Harvard's Hollis Professorship of Mathematics and Natural Philosophy, which Peirce had held from 1888 until his death in 1914. Dictionary of Scientific Biography. . (Inventory #: 41137)
$950.00 add to cart or Buy Direct from
Jeremy Norman & Co.
Share this item
Jeremy Norman & Co., Inc.
Offered by