The principal forms of the skeleton. Parts 1-4 (complete) 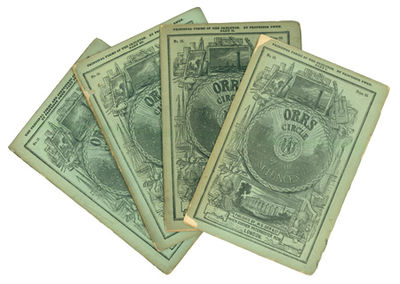 by Owen, Richard
London: W. S. Orr, 1854. Owen, Richard (1804-92). The principal forms of the skeleton. Parts 1-4 (complete). 161-304pp. Text illustrations. London: W. S. Orr & Co., [1854]. 204 x 140 mm. Original printed wrappers, a little chipped, spine of part 4 worn away. Very good set. First Edition, in the Rare Original Parts. Published as part of William S. Orr's Circle of the Sciences, Owen's Principal Forms of the Skeleton was a popular rendition of his On the Archetype and Homologies of the Vertebrate Skeleton (1849), the work in which he laid out his system of comparative osteology and developed his concept of the vertebrate archetype. "The vertebrate archetype (from the Greek arkhe, 'original,' and tupos, 'imprinted image') is one of the most fascinating constructs of what has been called the 'morphological period' in the history of biology (approximately 1800-1860). It represented the fullest expression of a belief in the fundamental relatedness, if not of all organisms, at least of all animals with endoskeletons. Moreover, as Darwin scholars have long recognized, the vertebrate archetype provided a direct stepping-stone to the notion of evolutionary ancestors" (Rupke, "Richard Owen's vertebrate archetype," 231). The Principal Forms of the Skeleton was issued in both parts and in book form, and went through at least a dozen English and American editions. Rupke, "Richard Owen's vertebrate archetype," Isis 84 (1993): 231-251; Richard Owen, Victorian Naturalist (1994), pp. 161-170. . (Inventory #: 40856)
$900.00 add to cart or Buy Direct from
Jeremy Norman & Co.
Share this item
Jeremy Norman & Co., Inc.
Offered by