1876 Woodburytype of the The Right Rev. Monsignor Capel, D.D., Rector of the Catholic University College 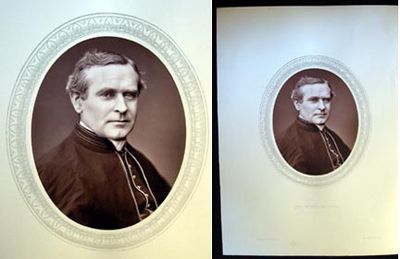 by (Monsignor Capel)
London & Edinburgh: Sampson Low, Marston, Searle, & Rivington, 1876. A sharp and clear oval Woodburytype portrait of Monsignor Capel; approx. 3 1/2" x 4 1/2" size, on the original heavy paper 8 1/2" x 10 1/2" sheet;Thomas John Capel (1836-1911) British-born Roman Catholic priest "...Unusually, he did not attend a seminary, so it must be presumed that he was ordained on his own patrimony. The source of his private income is unknown. In 1863 Capel retired for reasons of health to Pau, in the Basses-Pyrénées, where he acted as English Catholic chaplain, earned a reputation as a preacher and controversialist, (characterized by his later ultramontanism) and made some fashionable converts..." he went on to become intimate with the Pope at Rome, appointed a monsignor and papal chamberlain - eventually starting the Catholic University which subsequently ran into financial difficulties, causing an examination of the affairs of the Monsignor which revealed his debts and alleged misconduct with women; this was denied by Capel who left for Rome in order to receive papal support for his case- nevertheless "...by a decree of 6 February 1887, valid worldwide, Capel was finally suspended from the exercise of his priestly faculties. Meanwhile, in 1883 Capel had migrated to the United States, where he undertook a highly successful lecture tour of the eastern and mid-western states before settling in 1885 at San Francisco, where he lived in some style. In 1886 he took up permanent residence at Arno Ranch, near Galt, in northern California, as the guest of Mrs Alice Valensin, whose son he tutored. He continued to publish pamphlets in defence of ultramontane doctrine, and was befriended by Thomas Grace, the bishop of Sacramento, at whose residence he died on 23 October 1911. The entry he supplied to the American Catholic Who's Who of 1911 gives a somewhat misleading account of his meteoric career." (G. Martin Murphy in the DNB); photograph by Thompson Cooper, Lock & Whitfield photographers; oval Woodburytype, (photoglyptie) patented in 1864 by Walter Bentley Woodbury (1834-1885) an early form of photomechanical print, made by embossing a photographic image on paper with a metal mold containing the gelatin relief of a photographic negative: "...the tonal scale of the resultant image was highly luminous...has a continuous tone, showing neither a screen nor a grain pattern..." (Baldwin, 1991); a striking portrait of this noted British clergyman, in very good condition. . Very Good. (Inventory #: 20364)
$20.00 add to cart or Buy Direct from Certain Books
Share this item
Certain Books
Offered by

St. Ann's Church, (Brooklyn, New York,) from the Year 1784 to the Year 1845, with a Memorial of the Sunday Schools. To Which is Added, An Appendix, Containing a Brief Notice of the Other Episcopal Churches in Brooklyn. By A Sunday School Teacher

Brooklyn, N.Y. : F.G. Fish , 1845
(click for more details about St. Ann's Church, (Brooklyn, New York,) from the Year 1784 to the Year 1845, with a Memorial of the Sunday Schools. To Which is Added, An Appendix, Containing a Brief Notice of the Other Episcopal Churches in Brooklyn. By A Sunday School Teacher)

The History of the First Locomotives in America. From Original Documents, and the Testimony of Living Witnesses

New York, NY : D. Appleton and Company , 1871
(click for more details about The History of the First Locomotives in America. From Original Documents, and the Testimony of Living Witnesses)
View all from this seller>