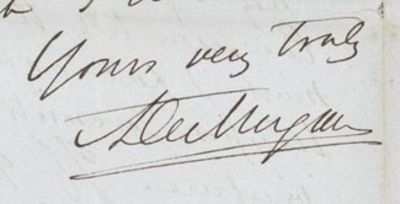 by De Morgan, Augustus
Camden Town, 1848. De Morgan, Augustus (1806-71). (1). Autograph letter signed to an unidentified correspondent. Camden Town, Jan. 27, 1848. 1 page plus integral blank. 180 x 114 mm. (2) Autograph letter signed to Admiral Sir Francis Beaufort (1774-1857). Camden Town, October 7, 1857. 2-1/2pp. 183 x 114 mm. Some foxing, blank portion of second leaf cut away. Together 2 letters, both mounted on single sheet together with printed obituary notice and wood-engraved portrait. Two dryly humorous letters from the mathematician Augustus de Morgan, known for formulating De Morgan's laws or De Morgan's theorem (rules in formal logic relating pairs of dual logical operators in a systematic manner expressed in terms of negation), and for introducing the term "mathematical induction" and making its idea rigorous. De Morgan was also the author of Arithmetical Books from the Invention of Printing to the Present Time (1847), which has been described as "the first significant work of scientific bibliography" (Dictionary of Scientific Biography). De Morgan's 1848 letter reads as follows: I can't find Leverrier's Christian names-or, not to make any assumption which a member of the Institute might repudiate-his prénoms. They begin with U. J. Can you tell them? Or must I put down Ulysses Jeremiah at a venture. If you can't tell them, can you calculate them. They can hardly be as difficult as a planet. If you happen to know Hencke's, pray tell them to me: but I can't demand them of you as a right which I do Leverrier's. "Leverrier" refers to Urbain Jean Joseph Leverrier (1811-77), the French astronomer whose mathematical calculations and astronomical observations of the perturbations of Uranus led directly to the discovery of Neptune. "Hencke" refers to German astronomer Karl Ludwig Hencke (1793-1866), discoverer of the asteroids 5 Astraea and 4 Vesta. The 1857 letter reads: I had a note from Mr. Smyth this morning, by which I was very glad to hear that you were able to write, and that your handwriting was still of the old firm type. This note was in answer to one which made some inquiries about your identity-not health alone, but identity-and it appears that you and I have been fellow sailors, and that 51 years ago this very month. To be sure we were, as we may say, at the two extreme ends of the chain. You commanded the Woolwich, and I commanded nothing but my mother's constant attention, being then an infant of four months old on board the Jane Duchess of Gordon E. S. But my command was in better order than yours; for my voice was sufficient per se, whereas yours would have been of little effect but for the knowledge that the nine tails and powder and ball were looming in the distance as definite possibilities. I picked up my mother's journal a few days ago, which let me into this little secret. It would do you good to see how you were cut up when you shortened sail against the wishes of the ladies. De Morgan was born in India and returned to England as an infant; his letter refers to this voyage. His correspondent, Admiral Sir Francis Beaufort, was a naval hydrographer who conducted important hydrographic surveys in South America and southern Anatolia; he served for 25 years as head of the Hydrographic Office of the British Admiralty, and invented the Beaufort scale for indicating wind force. . (Inventory #: 40154)
$750.00 add to cart or Buy Direct from
Jeremy Norman & Co.
Share this item
Jeremy Norman & Co., Inc.
Offered by