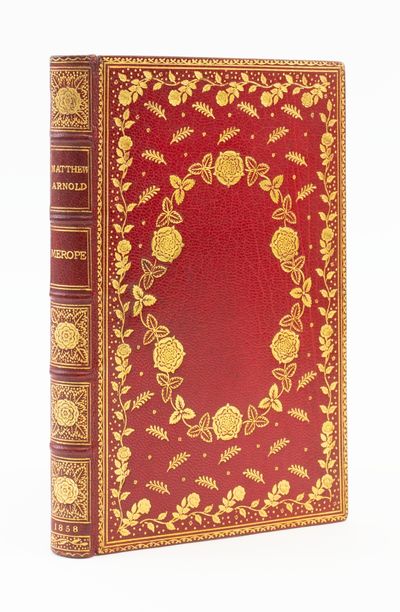 by (BINDINGS - DE COVERLY). ARNOLD, MATTHEW
London: Longman, Brown, Green, Longmans, & Roberts, 1858. FIRST EDITION. 170 x 103 mm. (6 3/4 x 4 1/8"). lii, 138 pp. With half title, but bound without the ads at rear.
VERY PRETTY RED CRUSHED MOROCCO, GILT, BY ROGER DE COVERLY (stamp-signed on front pastedown), covers with oval wreath of Tudor roses at center, with a scattering of leaf frond tools above and below, the whole enclosed by a frame of climbing roses on a ground of gilt dots and a gilt fillet and decorative roll border, raised bands, spine compartment with large rose surrounded by rose leaves at center on a pointillé ground, gilt lettering, turn-ins with floral branches extending from corners, marbled endpapers, all edges gilt. Spine slightly but evenly darkened, mild foxing to flyleaves, lightly affecting half title and final page of text, a hint of browning just to edges of leaves, but still probably qualifying as a fine copy, clean and fresh inside, in an unworn, very decorative binding.

This first edition of Arnold's longest poem is offered here beautifully covered by a prominent and influential English binder. Matthew Arnold (1822-88) is ranked by Day as one of the three great Victorian poets (along with Tennyson and Browning). Inspired by Sophocles' "Electra," Arnold's present rendition of a Greek tragedy seeks to answer "self-pitying Romanticism" with "the dignified classical ideal of 'distinctness and depth of impression.'" (Day) Arnold later turned his attention to criticism, where, according to DNB, he earned his "pedestal among the immortals" through his influence on the study and teaching of English literature in the U.S. and Britain. The very attractive binding here is the work of Roger de Coverly (1831-1914), one of the most accomplished binders in England during the latter part of the 19th century. He was apprenticed to Zaehnsdorf in 1845, worked for J. & J. Leighton from ca. 1852-63, then established his own bindery. In the 1880s, his bindings were in great demand, as were his services as a teacher: he undertook a good deal of work for William Morris, and he counted among his illustrious students the younger Charles McLeish as well as the greatest of all English bookbinders, T. J. Cobden-Sanderson, who served an apprenticeship with him in 1883-84. Working mostly in the classical style, De Coverly and his two sons demonstrated craftsmanship that was consistently of the highest quality.. (Inventory #: ST16980)
$2,704.00 add to cart or Buy Direct from
Phillip J. Pirages Fine Books
Share this item

30 day return guarantee, with full refund including shipping costs for up to 30 days after delivery if an item arrives misdescribed or damaged.Does the default shipping charge seem high? If so, please contact us by email at info@pirages.com for a shipping charge tailored to your order and location. You may also call us at (800) 962-6666 in the US or (503) 472-0476 outside the US, Monday through Friday between the hours of 10 am and 4 pm US Pacific time or leave us a message. For all orders outside the US and Canada, please contact us for shipping charges before completing your order. If you complete your order before you receive a shipping quote, we will need to contact you to get additional funding to cover the cost of shipping before we can ship your items.Except in the cases of items priced at $100 or less (for which we charge a small handling fee), we wish only to pass along actual carrier charges to our customers. The constraints of this website force us to assume that each purchase is both heavier and further away than average, so we would be pleased to adjust the charges to reflect actual weights and locations.
More from this seller

THE CHRISTMAS BOOKS: A CHRISTMAS CAROL; THE CHIMES; THE CRICKET ON THE HEARTH; THE BATTLE OF LIFE; [and] THE HAUNTED MAN

Paris : A. Quantin , 1880
(click for more details about FAUST)
View all from this seller>