Collection of twelve original photographs relating to The Arizona Wranglers 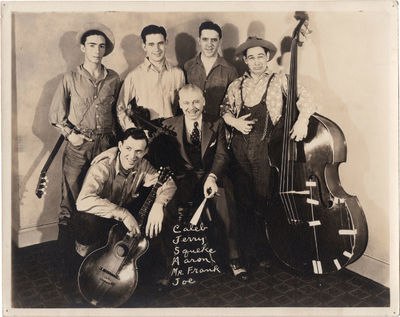 by The Arizona Wranglers (subject)
N.p.: N.p., 1930. Collection of twelve vintage photographs, five double weight, one borderless, of various members of the Hollywood cowboy musical group, The Arizona Wranglers, circa early 1930s, not to be confused with the sports team of the same name. One with a "Jakway Photo Service" stamp, and one with a "Let's Have a Party / A WIlbur Cushman Circuit Unit" stamp, on the versos.

Among the earliest of Hollywood's singing cowboys, The Arizona Wranglers were a frequently changing roster of musicians performing early cowboy country and western songs during the the 1930s, often featured in the early sound westerns and the popular B-westerns of the 1930s. Formed in the late 1920s as the house band for the XXX Rootbeer Drive-in in Phoenix, the band soon migrated to Hollywood singing songs of the plain and the prairie, and of a cowboy ethos, and helped to herald in the popularity of the era's country western music. They frequently had work in westerns of the period, nearly always uncredited, except in the instance of an individual member also having an acting part in the film. The only film credit received as a group was for the 1935 western musical, "Stormy," directed by Lew Landers, as "The Original Arizona Wranglers." They often performed at movie theaters as a tie-in when the film featured one of their songs, and regularly performed evening shows on Hollywood radio station KNX, as well as affiliate work with Wilbur Cushman Performance, and the "Blue Monday Jamboree" radio program.

8 x 10 inches. Very Good plus, several with pinholes in the margins, two with small chips to the top left margin, one with a minor chip to the bottom left corner, and two with closed tears to the top center. (Inventory #: 157039)
$875.00 add to cart or Buy Direct from Royal Books
Share this item
Royal Books, Inc.
Offered by

If you have questions about a book, feel free to call us anytime at 410-366-7329. Mailing address: Royal Books / 32 West 25th Street / Baltimore, MD / 21218. We accept VISA/MC/AMEX/DISCOVER, check or money order, and PayPal (ID is mail@royalbooks.com). All books noted as First Editions are also First Printings unless indicated otherwise. All books are guaranteed to be as described, and may be returned at any time for any reason for a full refund, including return postage. Libraries, institutions, and accredited dealers can be sent books with invoice.
More from this seller

Original photograph of the first legal whiskey produced during prohibition in Cincinnati, Ohio, 1933

Cincinnati : Romach and Groene , 1933
(click for more details about Original photograph of the first legal whiskey produced during prohibition in Cincinnati, Ohio, 1933)
View all from this seller>