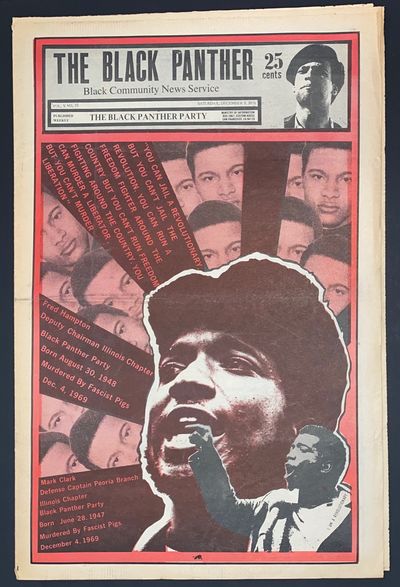 San Francisco: The Black Panther Party, Ministry of Information, 1970. Newspaper. 16p. tabloid format newspaper, mild horizontal fold, evenly toned. Front cover features Fred Hampton and Mark Clark on the one year anniversary of their death. Rear cover is a full page Emory Douglas poster, "You can murder a revolutionary but you can't murder revolution." Center pages: "Revolutionary People's Constitutional Convention resolutions and declarations." The Revolutionary People's Constitutional Convention was an effort by the Black Panthers to unite with other revolutionary groups in a broad alliance, with the goal of promulgating a new constitution. (Inventory #: 290910)
$175.00 add to cart or Buy Direct from Bolerium Books
Share this item

All books subject to prior sale Major Institutions can be billed. ALL BOOKS ARE IN VERY GOOD CONDITION OR BETTER UNLESS NOTED. All books returnable for any reason within thirty days of receipt.
More from this seller

The Columbia Conserve Company: an Experiment in Workers' Management and Ownership

Nottingham : The Trent Book Shop/Tarasque Press , 1968
(click for more details about Tarasque #8)
View all from this seller>