A Plan of New York Island, Part of Long Island &c. Showing the Position of the American and British Armies, before, at, and after the Engagement on the Heights, August 27th, 1776 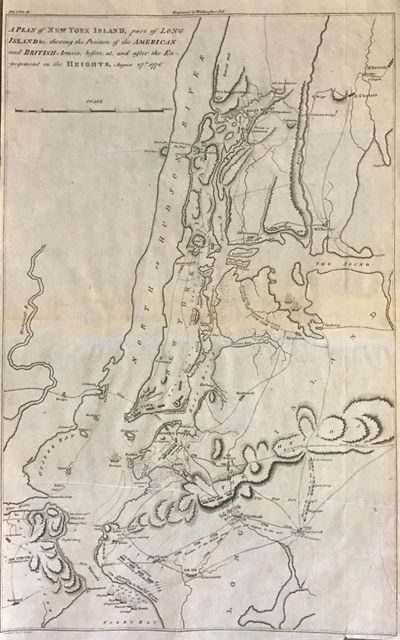 by MARSHALL, John
Philadelphia: C. P. Wayne, 1807. unbound. Map. Uncolored engraving. Sheet measures 17 x 10.5". This important and rare map of New York City and vicinity depicts the events surrounding the Battles of Long Island and Harlem Heights, which eventually led to the British takeover of New York and vicinity, and includes army positions and movements. Covers the theater of war in Manhattan, the Bronx, Brooklyn, Long Island, Queens, Staten Island, and parts of New Jersey. Land and sea position and movements of the British and American armies are noted. Following the evacuation of the British in Boston in March 1776, the British landed huge forces to gain control of the lower Hudson and New York City. They landed on Staten Island and Long Island and managed to defeat Washington at the Battle of Long Island or the Battle of Brooklyn Heights. Washington and his trapped forces managed to escape to Manhattan on August 29. The fighting finally culminated in the Battle of Harlem Heights in New York City. The American army was overpowered once more and driven northward to Westchester County and eventually across New Jersey into Pennsylvania and famously across the Delaware which became the turning point in the war. This map notes towns, fortifications, roads, and topography throughout. The map was part of the rare 1807 atlas volume belonging to Chief Justice John Marshall's seminal six volume biography of Washington. In good condition with minor wear along original folds. John James Marshall (1755--1835) was the fourth Chief Justice of the United States. A renowned Federalist, Marshall's admiration for George Washington led him to publish "The Life of Washington," a five-volume biography of the famed President and general. In 1832, he produced a revised and condensed two-volume edition with hand-colored maps. This map attests both to Marshall's influential work and to the skill of the general it honors. (Inventory #: 309271)
$1,500.00 add to cart or Buy Direct from
Argosy Book Store
Share this item

All items are offered net, subject to prior sale. Returns accepted within 7 days of receipt--please contact us first. Payment by Visa , Mastercard & American Express. Appropriate sales tax will be added for all N.Y. State residents
More from this seller

Venice : Giralamo Ruscelli , 1574
(click for more details about Toscana Nuovo Tavola)
View all from this seller>