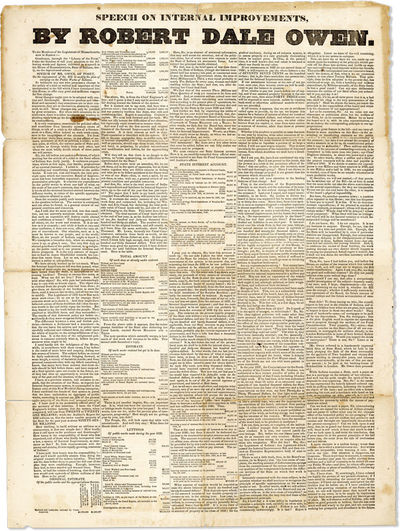 by [ECONOMICS & REFORM] [INDIANA] OWEN, Robert Dale
N.p., n.d. [Boston?: 1838]. Broadside, 53cm x 39cm. Text in five columns beneath headline. Issued without imprint, but introduced as follows: "To the Members of the Legislature of Massachusetts, now in Session..." Old folds; a few thin splits, with no loss to text; complete and Good.

A large and substantial broadside, printing the text of Owen's address before the Indiana General Assembly, arguing against funding for public improvements and supporting his own bill to restrict the state's spending on infrastructure and to rescind existing contracts. The speech, delivered at the height of the severe economic recession of 1836-38, perfectly illustrates Owen's post-New Harmony transformation from utopian socialist to populist politician: in it, he inveighs against a laundry list of internal improvements, claiming they will plunge the state into irreperable debt, and asserts that the burden will lie heaviest on future generations of working people: "State debt! To those among us who, like myself, expect to live and to die citizens of Indiana, and to leave our children here when we are gone, how much of import is there in these two short words?...Your property, Sir, - mine, - that of every member on this floor - that of all our constituents, is mortgaged, for millions already, to the London Rothschilds or some of their brother Rulers of the money market...While Indiana remains a state, such a [burden] as that is a mortgage on the industry of her citizens..."

Though the subject matter may at first glance appear somewhat dry, this is a most illustrative document for the period, directly addressing pressing questions of taxation and growth on the American frontier during the first decades of industrial expansion; involving perhaps the most colorful and complicated political figure in the early years of Indiana statehood. OCLC notes only a single holding (Indiana State Library), no other copies traced in commerce. (Inventory #: 57888)
$950.00 add to cart or Buy Direct from
Lorne Bair Rare Books
Share this item

All items are offered subject to prior sale. Orders must be prepaid, though billing may be arranged for institutions and customers with established credit. Payment may be made by Check, Money Order, Paypal or by valid credit card (Visa, MasterCard, American Express or Discover). Any item may be returned within 10 days of receipt for full refund. Signed and manuscript items carry an unlimited guarantee of authenticity.
More from this seller

New York : The Viking Press , 1945
(click for more details about Dragon Harvest [Inscribed])
View all from this seller>