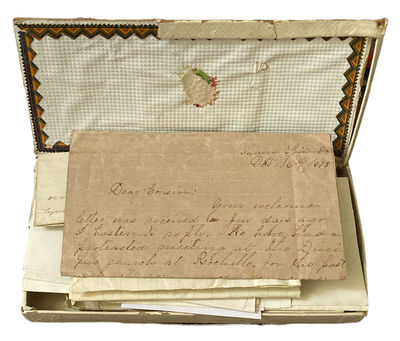 by Henkel Family
New Market / Staunton / Dayton / Etc.: By the authors, 1864. Very good. Hundreds of personal letters, Day Books, journals, invoices, business correspondence, checks, school transcripts, leaflets, newspapers, etc., 1864 - 1920s; various formats, many handwritten, some typed and printed; condition varies from near fine, with very minor wear, to fair, with brittle paper, chips and splits. Some, mostly covers and envelops, with insect damage to edges; overall in very good condition.The Henkel Press was founded by brothers Ambrose Henkel (1786 - 1870) and Solomon Henkel (1777 - 1847), in the home of their father Rev. Paul Henkel (1754 - 1825) - all prominent Lutheran ministers, active in Virginia, Tennessee, and North Carolina - using hand-hewn, mahogany-and-cottonwood-logs frame and a Ramage press. It would be one of the earliest publishing houses in the South and the first German-language press south of the Mason-Dixon line. Various family members would branch out into farming, education, the military, retail, and so on.A massive collection, it covered the business affairs and personal lives of several generations of Henkels, in three distinctive groups. The first, small group of material, covering the 1860s and 1870s, included personal correspondence of Eugenia Elizabeth Stiegel (1856 - 1937) - future wife of Henry Milton Henkel (1853 - 1933) - the latter son of Hiram and Margaret Coiner Henkel and grandson of Ambrose Henkel. Several of them were courtship letters between Eugenia and Henry, in one of which he offered to escort her to a meeting of the Lee Literary Society (originally Virginia Literary Society) - the first student organization at present-day Virginia Tech. Another letter, beginning "Dear Wife," was written after their marriage, in which Henry wrote of his business trip. Others included discussions on Methodist church matters. Also enclosed was a thick coil of hair, presumably Eugenia's, tied with a ribbon and stored in a small, cardboard box.The second, very large collection, spanning mostly the 1890s, belonged to Harry Stiegel Henkel (1879 - 1945) and Lillian Margaret Henkel (1880 - 1965) - children of Eugenia and Henry and owners and co-owners of several businesses. Much of the material was related to C. W. Hammond & Co., one of the above-mentioned enterprises, but also H. S. Henkel & Co., J. D. Craeger, and others, and included partnership contracts, bills of sale, receipts, invoices, business letters, Day- and Account Books, deeds, checks, several issues of "The Southern Lutheran" and "The Shenandoah Valley," trade catalogs from various companies, etc. It was an important source of information regarding import and export of goods and livestock in and out of state, with merchants' names as far as New York and Philadelphia. Part of it also reflected on Harry and Lillian's education - Harry attending Dunsmore Business College and Lillian - the Shenandoah Institute - including course books, notebooks, promotional material for the institutions, leaflets, college currency, and college grocery coupons. The last, fairly substantial group, 1910s - 1920s, reflected on the life of Ray William Renalds, son of Heleah Margaret "Maggie" Henkel and great-grandson on Solomon Henkel. It included extensive personal and business correspondence between Ray, his brothers, and his father, several mentioning the War (First World War), as well as numerous letters from friends and relatives (several of the latter from Marvin Renalds, Typographer); schoolwork, transcripts, what-appeared-to-be a manusript dictionary / thesaurus; invitations and greeting cards; tuition payments to the Shenandoah Lutheran Institute, and so on.  (Inventory #: 003284)
$3,800.00 add to cart Available from ZH Books
Share this item
ZH Books
Offered by

All items are offered subject to prior sale. Unless specific arrangements have been made, payment is expected with order. Institutions may be billed to meet their requirements. Accepted payment methods are: Check, Money Order, Paypal or valid CC (Visa, MasterCard, American Express, or Discover). Any item may be returned within 10 days for a full refund. All items are guaranteed to be as described.
More from this seller

National Birth-Night Ball. Under the Special Patronage of Mrs. Polk, Mrs. Madison, Mrs. Adams, Mrs. Hamilton. The Honor of [ ] Company is Requested at Jackson Hall, on the Evening of the 22d February, 1848