The Shirley Letters from California Mines in 1851-52; Being a Series of Twenty-three Letters from Dame Shirley [Mrs. Louise Amelia Knapp Smith Clappe] | To her Sister in Massachusetts and now Reprinted from The Pioneer Magazine of 1854-55 [Thomas C. Russell, Introduction] 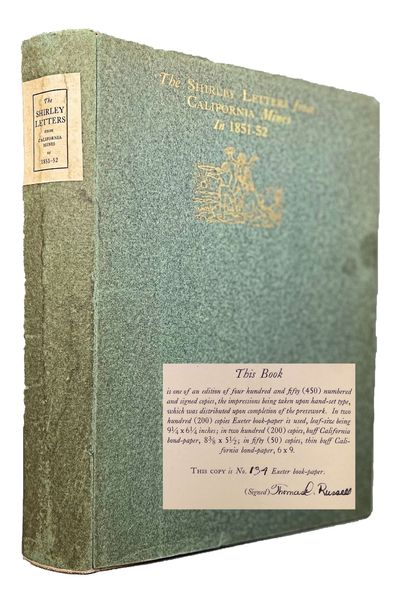 by Clappe, Louise [Dame Shirley]
San Francisco: The Private Press of Thomas C. Russell, 1922. First Edition. Near Fine/Very Good. M. Buehler, Illustrator. #134 of 200 Exeter book-paper copies limited to 450 total copies, SIGNED by Russell, 8vo [9.25X6.25in]; xxlix [forward by Russell, article by Mary Lawrence about Clappe, extended table of contents, and illustrations], [2], 350 pp., [1, colophon], frontispiece and 7 line illustrations with tissue guards, 23 Letters richly detailed dark blue illustrated devices at each Letter synopsis and beginning and end of letter; Forest green paper boards, tan linen spine back strip with black lettering on buff paper label, forest green end papers, Exeter book-paper, all edges untrimmed; Minimal shelf wear and rubbing to edges, front lower corner has small rubbed through, faint water stain to back strip front and part of spine, distinctive large art deco bookplate of Carlo Sutro Morbio on front free end paper; Forest green dust jacket with gilt lettering and design on front, buff paper label on spine; Negiligible shelf wear to covers, spine, edges or corners, except minimal rubbing to bottom corners and text; Some shelf wear to dust jacket with several closed tears along edges, repaired split of front joint, small chips to top and bottom of spine and corners, water stain on spine affecting paper label, two stain spots on front fore-edge. [Kurutz 133a with variant binding, Wheat Gold Rush Books 39, Adams 425, Howell 373, Volkmann Zamorano 80 69a]. Louise Amelia Knapp Smith Clappe [1819-1906] accompanied her husband on the ship "Manila" to California in 1849. Fayette, a medical doctor, and Louise were in their 30's and wanted an adventure. After staying in San Francisco, they moved to Rich Bar on the Feather River in 1851. Louise was not shy or reserved and was a keen observer of the rough gold miners life. Between September 1851 to November 1852, she wrote 23 letters to her sister Molly [Mary] describing her time in the mountains. They were first published in The Pioneer magazine under the pseudonym of "Dame Shirley" from January 1854 to December 1855. This is the first book form printed since magazine printing. The introduction and synopsis by Thomas Russell provided context to the letters that became one of the best first hand accounts of the mining camps. Russell was known for his book design, printing and binding, and, in this book, his thoughtful and well researched introduction.

Carlo Sutro Morbio (1888-1971), was the grandson of Adolph Sutro and son of Rosa Victoris Sutro Morbio. Adolph Sutro was an engineer and San Francisco politician that became wealthy in the 1860's from silver Comstock lode in Virginia City. On return to San Francisco, he built the Cliff house, Sutro baths and other tourist attractions, and a short time as Mayor of San Francisco. Sutro's daughter, Rosa, married Pio A. Morbio, an Italian aristocrat. The couple entered the high social society in the Bay area and produced several children. Her son, Carlo, became a San Francisco lawyer and married Patricia Irene O'Connor (1889-1937) and, later, Loraine Mary O'Brien. Little has been discovered about Carlo or his library, in spite of the impressive bookplate with what appears to be a bad Latin motto(s) of "labor omnia vincit | non est vivere sed valere vita", translated to something like - work conquers all | life is not to live, but to live well .

Russell was a long standing printer, publisher and author in San Francisco from the mid-1880's to his death in 1931. This book, and his many other books, are beautifully written, designed and printed. His research has added to the history of California and the exploration of the Pacific Northwest. The printings were always limited and the early books were numbered, signed with handwritten annotations by Russell. Later books were haphazardly numbered and/or signed by others that acquired his stock after his death. (Inventory #: 13906)
$1,044.00 add to cart Available from
David Spilman Fine Books
Share this item

All items offered online or in catalogues are subject to prior sale. Trade discount for most items is available and may be limited for consignment items. We will also accept checks that are cleared prior to shipping or invoice clients known to us. 30 day return guarantee, with full refund including original shipping costs for up to 30 days after delivery if an item arrives or damaged or not as described. Buyer will be responsible for return shipping, unless item is not as described
More from this seller

The March of Portola and the Discovery of the Bay of San Francisco | The Log of the San Carlos; and Original Documents Translated and Annotated [Souvenir | California Jubilee Banquet, Waldorf Astoria Hotel - New York, 1909]

The Horse Wrangler and His Remuda; [Images by William D. Wittliff]

Austin : The Encino Press , 1971
(click for more details about The Horse Wrangler and His Remuda; [Images by William D. Wittliff])
View all from this seller>