MIKA: THE BOOK OF MAUD AND MISKA PETERSHAM 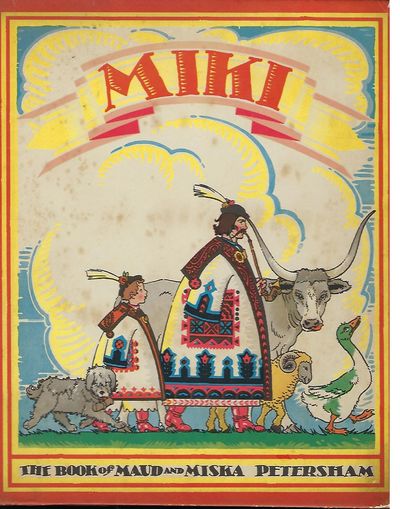 by PETERSHAM, Maud and Miska
Garden City, NY: Doubleday, Doran & Company, Inc, 1929. First Edition (so stated). Signed by both Maud and Miska Petersham on the front endpaper. A story written about a young Hungarian boy named Miki, created for the Petersham's own son, Miki. Maud Fuller Petersham [1890-1971] and Miska Petersham [1888-1960] were American writers and illustrators who helped set the direction for illustrated children's books. The Petershams worked closely with such pioneering children's book editors Louise Seaman Bechtel and May Massee, and with such innovative printers as Charles Stringer and William Glaser. They worked as a seamless partnership for more than five decades. Both prolific and versatile, they produced illustrations for more than 120 trade and textbooks, anthologies, and picture books. Of the 50 books they both wrote and illustrated, many were recognized with important awards or critical acclaim. They are known for technical excellence, exuberant color, and the introduction of international folk and modernist themes. Signed copies of this title are uncommon. Small quarto: pictorial boards in original dust jacket;. Illustrated By The Authors.. Very Good (little edgewear & soil covers; little light spotting endpapers with contents clean & tight (few ink marks on a few pages); very worn (chips, tears, some old tape residue, spine separated) d/j. A scarce dust jacket in any condition! (Inventory #: 57530)
$275.00 add to cart or Buy Direct from Antic Hay Books
Share this item
Antic Hay Books
Offered by

Specializing in Autographs & Signed Books, Association Copies in all fields.

30 day return guarantee, with full refund including shipping costs for up to 10 days after delivery if an item arrives misdescribed or damaged.
More from this seller

THE PRIVATE WORLD OF KATHERINE HEPBURN