About Zionism: Speeches and Letters by Professor Albert Einstein. 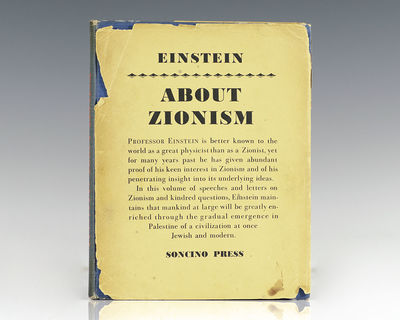 by Einstein, Albert. Introduction by Leon Simon
London: The Soncino Press, 1930. First British edition (which precedes the American edition by one year) of this volume of Einstein's speeches and letters concerning his views on Zionism. Octavo, original cloth. Very good in the scarce original dust jacket which is lacking the spine. Einstein was a prominent supporter of both Labor Zionism and efforts to encourage Jewish-Arab cooperation. He supported the creation of a Jewish national homeland in the British mandate of Palestine but was opposed to the idea of a Jewish state "with borders, an army, and a measure of temporal power." In a letter to Jawaharlal Nehru dated June 13, 1947, he asserted, "Long before the emergence of Hitler I made the cause of Zionism mine because through it I saw a means of correcting a flagrant wrong....The Jewish people alone has for centuries been in the anomalous position of being victimized and hounded as a people, though bereft of all the rights and protections which even the smallest people normally has...Zionism offered the means of ending this discrimination." Einstein's speeches, lectures, and letters concerning Zionism were first published in 1930 by The Soncino Press and eleven of these essays were later collected in The World as I See It, published in 1933, which Einstein dedicated "to the Jews of Germany". (Inventory #: 126038)
$1,150.00 add to cart or Buy Direct from
Raptis Rare Books
Share this item

30 day return guarantee, with full refund including shipping costs for up to 30 days after delivery if an item arrives misdescribed.
More from this seller

The Poetical Works of Oscar Wilde.

Portland, Maine : Thomas B. Mosher , 1908
(click for more details about The Poetical Works of Oscar Wilde.)

New York : Abbeville Press , 1983
(click for more details about Warhol.)
View all from this seller>