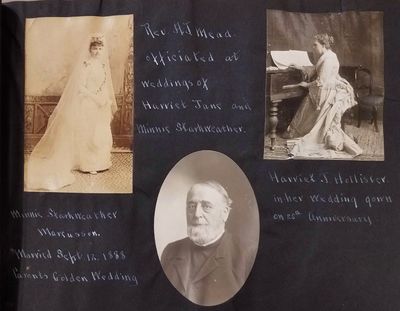 This album contains photos that depict members of the Bailey and Starkweather families of Kenosha County, Wisconsin. Compiled in 1907 but most of the photos were taken in the 19th century. Contains 119 photos. Most photos are albumens and there are a few silver gels; there are also cabinet cards, CDVs, and photos from daguerreotypes (silver gels and albumens). Photos measure 1” x 5” to 8” x 6” with most measuring in between; photos are tipped in. There are also two certificates to Charles M. Starkweather: (1) Oct. 6, 1895 Office of Deacon, (2)Sept. 14, 1902 Office of Elder of the Methodist Episcopal Church Milwaukee, Wisconsin. About half of the photos are captioned in white ink. Black pebbled album covers measure 11” x 14”. Covers have light wear; leaves have moderate waviness from glue; photos range in condition from good to very good, and most depict a crisp image; certificates were folded and have moderate toning. Overall very good. This album contains a wealth of knowledge of the Bailey and Starkweather families.The first half of the album contains portraits of family members with their name, birthdate and death date, and almost all of these are captioned; the second half of the album contains photos of the families at gatherings or at home, most of these are not captioned. There is some good information regarding early genealogy of the Bailey and Starkweather families. Some of the images in this album were first taken pre-Civil War such as the photos from daguerrotypes of the Bailey family (taken in 1850). The second half of the album contains many images of J.B. Starkweather and Mary Bailey and their descendents. J. B. Starkweather married Mary Bailey on Sept. 12, 1838. There are images of their children Minnie, Harriet and Gleason. Gleason Starkweather is noted as a student in the first graduating class of Kenosha High School. There are images of the Starkweather Homestead and Drug Store found on Main Street in Kenosha. There is a great photo of young people lined up on a log above the water titled “Min’s picnic days” and a sweet photo of “Mother’s picture taken on 80th birthday under the syringa bush - said bush being 40 years old.” An excellent album for those studying genealogy or Wisconsin history. . (Inventory #: 022338)
$425.00 add to cart Available from
Back of Beyond Books
Share this item

Back of Beyond Books

1905
(click for more details about Testimony of Notary Public, Amado Cantu, of Puebla, Mexico [1905])
View all from this seller>