1889 Newspaper on African-American Voter Suppression: "...there is now but little doubt that in many election districts in the South either only a small number of the colored people vote, or, if they vote, the votes are not reported 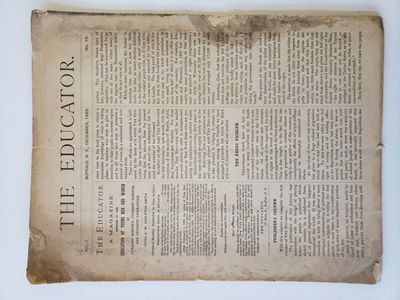 by African American, Voter Suppression
[African American] [Voting] Newspaper reports on suppression of Black votes in Southern states. The Educator. Vol. 1, No. 10. Buffalo, NY, December 1889. . "...there is now but little doubt that in many election districts in the South either only a small number of the colored people vote, or, if they vote, the votes are not reported...The assertion is made that the whites in the South do not allow the negroes to votes, often keeping them away from the polls by force." Pp. 145-160. Dimensions 12.5 x 9.5 in. Front page article "The Negro Problem" reports on African American voter suppression. "Of all political and economic questions, that of the negro and his political rights in the South is doubles the most aggravating and the least understood." A magazine devoted to the education of young men and women in current history, current science, and current literature. Edited by W. Hazelton Smith. Soiling to first page, small 1 x .5" loss at center right edge. Some water damage to first three pages. In good condition. (Inventory #: 17183)
$280.00 add to cart Available from
Share this item
Max Rambod Inc.
Offered by

30 day return guarantee, with full refund including original shipping costs for up to 30 days after delivery if an item arrives misdescribed or damaged.
More from this seller


(click for more details about Hand Colored Lithographs of Wa Pel La, Chief of the Musquakees Native Americans)
View all from this seller>