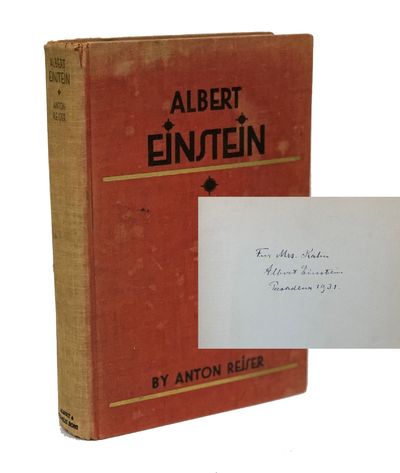 by Reiser, Anton. [Einstein, Albert]
New York: Albert & Charles Boni, 1930 First edition, second printing. Presentation copy; signed and inscribed by Albert Einstein in full to the front endpaper: "For Mrs. Kahn/ Albert Einstein/ Pasadena 1931." Original publisher's red cloth, front board lettered in black and ruled in gilt, spine lettered in gilt and black. About very good copy; spine faded, upper spine worn and lightly frayed, some scattered spots and small stains to covers. Housed in a custom leather clamshell box. Albert Einstein is a bibliography by Anton Reiser, a pseudonym for Rudolf Kayser, the husband of Einstein’s stepdaughter. Kayser, a German literary historian, gives an intimate view of the life of one of the greatest physicists who has ever lived. Einstein describes his familiarity with the author in his introduction of the book, writing, “The author of this book is one that knows me rather intimately in my endeavors, thoughts, beliefs- in bedroom slippers.” The book is divided into six chapters: Childhood and Early Life, Self-Support, Formulation of The Theory of Relativity, War-Time and After, Fame, and Einstein Today. This biography was published in 1930, three short years before Einstein was forced to flee Germany, due to Adolf Hitler’s rise to power and new laws banning Jews from holding official positions. Shortly after fleeing the country, Einstein’s books were targeted in the Nazi book burnings, a 5,000 Reichsmark bounty was put on his head, and the Nazi government pilfered his cottage and sailboat. Rudolf Kayser, the author, was also forced to leave Germany in 1935 because of his Jewish heritage. Albert Einstein was researching at the California Institute of Technology in Pasadena in 1931. He inscribed this copy that same year.. Signed. First Edition. Hard Cover. Very Good. (Inventory #: AE006)
$12,500.00 add to cart or Buy Direct from
B & B Rare Books
Share this item

~ All items are guaranteed as described. We recommend requesting pictures prior to purchasing. ~ Any items may be returned within seven days of receipt and in the same condition as originally sent. ~ We ship with FedEx, UPS and USPS. Please let us know if you prefer another shipping. ~ New York State are required to add 8.875% sales tax.
More from this seller