[AUTOGRAPH LETTER, SIGNED, FROM FORMER PRESIDENT JOHN TYLER TO COAL AND COTTON PRODUCER HAMILTON SMITH OF VIRGINIA, REGARDING "KING COTTON" AND HIS EXCITEMENT OVER THE DOMESTIC AND INTERNATIONAL MARKETS FOR THE CASH CROP JUST TWELVE YEARS BEFORE THE CIVIL WAR] 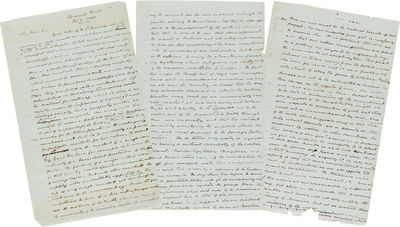 All material is shipped subject to approval, but notification of return must be made within ten days and returns made in a prompt and conscientious fashion.
More from this seller