ALS by Young Emily Griswold, Who Would Later "Be Dead for Six Hours," Before Being Revived and Would Eventually Become a Missionary in Liberia 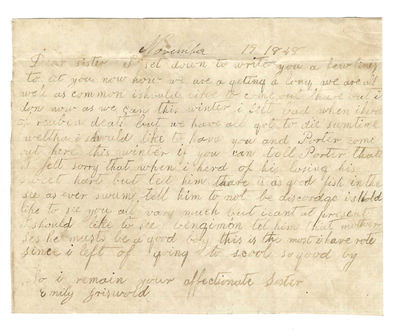 by Griswold-Hartley, Emily
S. l. (New York [?]): By the author, 1848. Very good. Autograph letter signed, dated November 19, 1848; single sheet of lined paper, trimmed, 6 1/4 x 8; text in brown ink on recto only; old creases and a few minor spots; in very good or better condition.Emily Griswold-Hartley (1838 - 1906) was the eldest daughter of anthologist, editor, author, and critic Rufus Wilmot Griswold and his first wife Caroline Searles. They would have another daughter, to whom the letter was addressed, and a son, before Griswold left his family and his work at the New York Tribune in 1840, moved to Philadelphia, and eventually married again and moved, one more time, to Charleston, South Carolina. After the tragic death of his first wife and their son, Rufus moved, yet again, back to New York, leaving Emily to be raised by relatives of her mother and the second daughter, Caroline - named after her mom - to his second wife's family. In New York he would marry a third time. In 1853, while Emily was travelling with her father's third wife through Connecticut by train, it derailed and fell off a drawbridge into a river. Emily was declared dead due to drowning and her father, rushing to the scene of the accident, saw her in a makeshift morgue, together with 48 more victims. She was revived 6 hours later. She would go on to become a missionary in Liberia, in 1860, where she would meet her future husband Reverend Benjamin Hartley. The area of Cavalla, where they worked, was settled by freed slaves by the Maryland State Colonization Society. Her letter, written when Emily was 10, was sweet and childishly-innocent, inquiring after mutual acquaintances, expressing desire to go visit her sister, and ending with: "...this is the most i have rote since i left of going to school so good by..." (Inventory #: 002867)
$250.00 add to cart Available from ZH Books
Share this item
ZH Books
Offered by

All items are offered subject to prior sale. Unless specific arrangements have been made, payment is expected with order. Institutions may be billed to meet their requirements. Accepted payment methods are: Check, Money Order, Paypal or valid CC (Visa, MasterCard, American Express, or Discover). Any item may be returned within 10 days for a full refund. All items are guaranteed to be as described.
More from this seller

National Birth-Night Ball. Under the Special Patronage of Mrs. Polk, Mrs. Madison, Mrs. Adams, Mrs. Hamilton. The Honor of [ ] Company is Requested at Jackson Hall, on the Evening of the 22d February, 1848