California: A History of Upper and Lower California From their First Discovery to the Present Time; Comprising an account of the Climate, Soil, Natural productions, Agriculture, Commerce, etc. A Full View of the Missionary Establishments and Condition of the Free and Domesticated Indians. With an Appendix relating to Harbors and Steam Navigation in the Pacific [Reprint of 1839 edition] 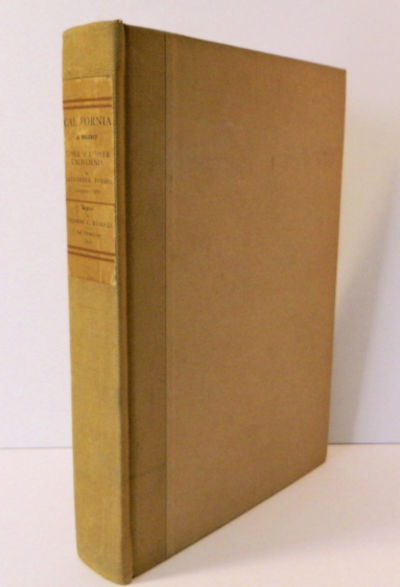 by Forbes, Alexander
San Francisco: Thomas C. Russell, 1919. First Edition. Near Fine. William Smythe, Illus.. Signed by Publisher, #184 of 250 limited printing [10.5x7.5in]; [5], 5a-10a [Forward], xvi, 372 pp.,10 lithographic color plates, including frontispiece of Father Antonio Peyri, woodcut illustration in text, fold out colored map of Pacific Coast from Panama to Cape Mendocino with insets of principal harbors [14.5x19.25in neatline], appendices, index; Original tan linen spine over tan paper on boards, paper spine label with black lettering and red rules, top edge gilt, other edges untrimmed, tan end papers, tipped in duplicate spine label on rear end paper; Minimal shelf wear to edges and covers with slight wear to corners, spine label darken with age, rubbing on spine label with minor loss of lettering, small closed tear repaired at map lower hinge, prior owner pencil signature, Elizabeth Gray Potter, on front end paper. [References for 1839 edition, Cowan, 217, Graff 1377, Sloan-Volkmann Zamorano 80 38a]. Alexander Forbes (1778-1862) was a Scottish merchant, explorer and author. The 1839 edition was the first book by an English writer and published in English on California. Forbes was a merchant and British Counsel in Tepic, Mexico. As a long time resident of Mexico, he saw the continued lack of interest by the young Mexican government and the understood the potential importance of Baja and Alta California to expanding British Control down the West coast. He advised the British to acquire California in exchange for forgiveness of Mexican debt, however that option was closed after the Mexican-American war (1846-48) and ceding of California and other western territories to the United States. Hubert Bancroft wrote regarding the narrative as "a presentation by an intelligent man of business of the country's actual condition, capabilities, institutions, and prospects." The lithographic plates were from William Smyth's water colors when he was an artist with F. W. Beechey's Bering Strait and West Coast expedition in the Blossom, 1825-28. and printed by Russell for this 1919 edition [From Gary Kurutz's review in Volkmann]

Elizabeth Gray Potter was a San Francisco author, historian and long time member and Fellow of the California Historical Society and editor of the Quarterly in the 1940's.

Russell was a long standing printer, publisher and author in San Francisco from the mid-1880's to his death in 1931. This book and his many other books are beautifully written, designed and printed. His research has added to the history of California and the exploration of the Pacific Northwest. The printings were always limited, and the early books were numbered, signed with handwritten annotations by Russell. Later books were haphazardly numbered and/or signed by others that acquired his stock after his death. (Inventory #: 13788)
$560.00 add to cart Available from
David Spilman Fine Books
Share this item

All items offered online or in catalogues are subject to prior sale. Trade discount for most items is available and may be limited for consignment items. We will also accept checks that are cleared prior to shipping or invoice clients known to us. 30 day return guarantee, with full refund including original shipping costs for up to 30 days after delivery if an item arrives or damaged or not as described. Buyer will be responsible for return shipping, unless item is not as described
More from this seller

The March of Portola and the Discovery of the Bay of San Francisco | The Log of the San Carlos; and Original Documents Translated and Annotated [Souvenir | California Jubilee Banquet, Waldorf Astoria Hotel - New York, 1909]

The Horse Wrangler and His Remuda; [Images by William D. Wittliff]

Austin : The Encino Press , 1971
(click for more details about The Horse Wrangler and His Remuda; [Images by William D. Wittliff])
View all from this seller>