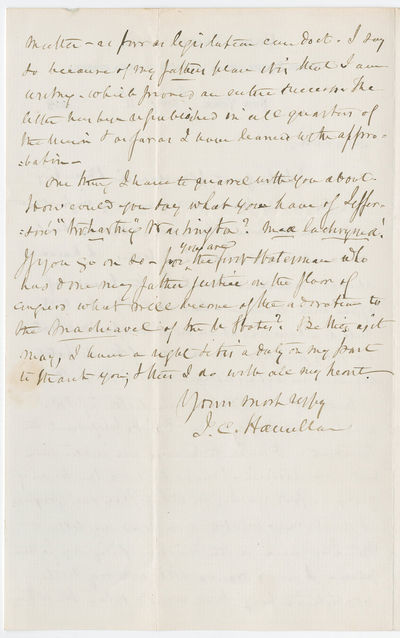 by JOHN C. HAMILTON
In this fascinating letter, Alexander Hamilton's son thanks U.S. Senator Jacob M. Howard for his report on President Andrew Johnson's attempt to dismiss Secretary of War Edwin M. Stanton. That attempt and the refusal of the Senate to endorse it led the U.S. House of Representatives to impeach Johnson just six weeks after Hamilton wrote this letter.

John Hamilton also jokingly refers to Howard's thinly veiled criticism of Thomas Jefferson, whom Hamilton characterizes as the "Machiavel of the U States." Italian Renaissance man Niccolo Machiavelli (1469-1527) wrote The Prince
(1513, published 1532) in which he commends an amoral expediency in the ruthless exercise of power, exactly the view the younger Hamilton held of Jefferson. Hamilton also commends his father's plan for funding the nation's Revolutionary War debt as a model for funding the Civil War debt. JOHN C. HAMILTON.
Autograph Letter Signed, to Jacob M. Howard, January 11, 1868, New York. 2 pp., 5 x 7⅞ in.

I take great pleasure in thanking you for having presented your very important report on the case of the Secy at War in such clear, decided, & decisive terms. I have always contended that when the tenure of office bill became a law – all objection to its rule as a law was at an end & therefore Mr Stanton was fully justified. The matter of the dispatch required an eclaircisment. This is perfectly done. I think it would have been better if Mr S had sent without delay Bairds telegram to the President. I wish to heaven our public men had your decision of character with the power of giving as good reasons for what they say & propose. I dont know whether you read my letter to Mr Lawrence on the Finances [firing(?)] my fathers plan. I could draw a bill with very little statistical help that would solve the whole matter – as far as legislation can do it. I say so because of my fathers
plan it is that I am writing, which proved an entire success. The letter has been republished in all quarters of the Union & as far as I have learned with approbation.

One thing I have to quarrel with you about. How could you say what you have of Jefferson's "thwarting" Washington? Meae lachrymae! If you go on so – for you are the first

statesman who has done my father justice on the floor of Congress what will become of the adoration to the Machiavel
of the U States? Be this as it may, I have a right & it is a duty on my part to thank you; & this I do with all my heart.

On July 29, 1866, Secretary of War Edwin M. Stanton received a telegram from General Absalom Baird, in command in New Orleans during the absence of General Philip Sheridan, who commanded the Military Department of the Southwest (Louisiana and Texas). Baird informed Stanton that Louisiana Governor James M. Wells had sanctioned a call for a convention to meet in New Orleans the following day, perhaps to revise the state constitution to provide suffrage for African Americans. The lieutenant governor and city authorities declared the meeting unlawful and planned to arrest the delegates. Lacking instructions, Baird told the local authorities that he could not "countenance or permit such action without instructions to that effect from the President." Baird asked Stanton for instruction "at once." Meanwhile, Lieutenant Governor Albert Voorhies had corresponded by telegraph with President Andrew Johnson, who assured him that the military would sustain and not interfere with the courts who planned to order the arrest of the convention delegates.

If Johnson planned to issue orders to the military in New Orleans, he would have issued them through Secretary of War Stanton. However, Stanton neither shared Baird's telegram with Johnson nor responded to Baird.

During the afternoon of July 30, white Democrats, including police and firemen, attacked Republicans, most of whom were black, outside the Mechanics Institute in New Orleans, where the Louisiana Constitutional Convention had reconvened. The resulting massacre left at least 44 black and 3 white Republicans dead, and more than 100 wounded. One bystander, a student at the Medical College next to the institute, stepped outside to see what was happening and was shot and killed by a stray bullet. Federal troops eventually suppressed the riot and jailed many of the white perpetrators.

The national reaction to the New Orleans massacre and earlier race riots in Memphis was to give Republicans an overwhelming majority of 77 percent in Congress in the fall 1866 elections. Early in 1867, Congress passed the First Reconstruction Act, over President Johnson's veto, to provide for more federal control in the South and temporarily to disfranchise ex-Confederates, most of whom were Democrats.

On Friday, January 10, 1868, Senator Jacob M. Howard of Michigan, as chair of the Committee on Military Affairs and the Militia, submitted his report on the message of President Johnson related to the suspension of Secretary of War Edwin M. Stanton. He also submitted the resolution, "Resolved, That having considered the evidence and reasons given by the President in his report of the 12th of December, 1867, for the suspension from the office of Secretary of War of Edwin M. Stanton, the Senate do not concur in such suspension." After debate on January 11 and 13, the Senate voted to agree to the resolution by a vote of 35 to 6.

John C. Hamilton (1792-1882) was born in Philadelphia, the fifth of eight children born to Alexander Hamilton and Elizabeth Schuyler Hamilton. He was eleven years old when his father was killed in a duel with Aaron Burr. He graduated from Columbia College five years later and studied law. He served in the U.S. Army during the War of 1812 as an aide-de-camp to Major General William Henry Harrison. He resigned in June 1814 and began to study history. He married Maria Eliza van den Heuvel (1795-1873), and they had fourteen children between 1815 and 1838. Between 1834 and 1840, he read, sorted, and organized his father's papers and wrote a two-volume biography entitled The Life of Alexander Hamilton
(1840-41), though most copies were destroyed in a fire where they were being bound. Over the next decades, he collected his father's writings under the authority of Congress and published them in seven volumes as The Works of Alexander Hamilton: Containing His Correspondence, and His Political and Official Writings, Exclusive of the Federalist, Civil and Military (1850-51). Between 1857 and 1864, Hamilton published a seven-volume combination of a biography of his father and history of the United States, entitled Life of Alexander Hamilton: A History of the Republic of the United States of America. In 1869, he published an edition of The Federalist, with historical notes and commentary. Originally a Whig, Hamilton later became a Republican.

Jacob M. Howard (1805-1871) was born in Vermont and graduated from Williams College in 1830. He studied law, moved to Detroit in 1832, and gained admission to the bar in 1833. He married Catherine Amelia Shaw (1810-1886) of Massachusetts, and they had seven children. Howard practiced law in Detroit and won election to the U.S. House of Representatives as a Whig in 1840, serving from 1841 to 1843. Howard helped found the Republican Party in Michigan in 1854 and served as that state's Attorney General from 1855 to 1861. When U.S. Senator Kinsley S. Bingham died in 1861, the legislature selected Howard to fill the vacancy. Winning re-election in 1865, Howard continued in the Senate until March 1871. During his tenure there, Howard worked with President Abraham Lincoln to draft and pass the Thirteenth Amendment. Howard also served on the Joint Committee on Reconstruction, which drafted the Fourteenth Amendment. He opposed presidential Reconstruction and authored the final report on President Andrew Johnson's removal of Edwin M. Stanton as Secretary of War. (Inventory #: 26035)
$1,500.00 add to cart Available from Seth Kaller
Share this item

30 day return guarantee, with full refund including shipping costs for up to 30 days after delivery if an item arrives misdescribed or damaged. Authenticity guaranteed for the life of the book or document.
More from this seller

“Anti-Texas” Opposes Annexation as a Slave State, Signed in type by Leading Male Abolitionists of Massachusetts

Boston 1845
(click for more details about “Anti-Texas” Opposes Annexation as a Slave State, Signed in type by Leading Male Abolitionists of Massachusetts)

Jefferson’s Excessively Rare BILL FOR ESTABLISHING RELIGIOUS FREEDOM Only the second known newspaper printing, and the first front-page printing. One of the three achievements of which Jefferson was most proud, as listed on his epitaph.

Virginia; Providence, Rhode Island 1780
(click for more details about Jefferson’s Excessively Rare BILL FOR ESTABLISHING RELIGIOUS FREEDOM Only the second known newspaper printing, and the first front-page printing. One of the three achievements of which Jefferson was most proud, as listed on his epitaph.)
View all from this seller>