THE ADVENTURES OF A CHINAMAN IN CHINA From the French of Jules Verne by Virginia Champlin .. 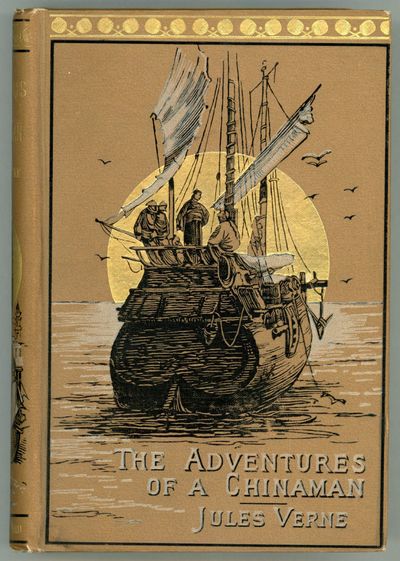 by Verne, Jules
Boston: Lee and Shepard, 1889. Octavo, pp. [i-iv] v-vi 1-271 [272: blank] [273-280: ads], flyleaves at front and rear, 50 illustrations by Leon Benett, original pictorial brown cloth, front and spine panels stamped in white, black and gold, cream endpapers. Second U.S. illustrated edition. The first edition in English was an unauthorized edition published by Lee and Shepard and Dillingham in October 1879 (with a title page dated 1880) as THE TRIBULATIONS OF A CHINAMAN IN CHINA. It was quickly followed by an 1879 cheap pirated paperbound edition published in George Munro's "Seaside Library." An illustrated British edition was published by Sampson Low in 1880 and an authorized illustrated American edition was published by E. P. Dutton the same year (although the latter has a title page dated 1881). This 1889 Lee and Shepard and Dillingham edition is a reissue of their 1879 edition with with the illustrations by Benett that first appeared in the Sampson Low and Dutton editions. Translation of LES TRIBULATIONS D'UN CHINOIS EN CHINE (1879). A farce set in China concerning a Chinese who plans his own assassination and then changes his mind. Minor science fiction element is escape to sea using watertight, buoyant suits. Myers 55. Taves and Michaluk V020. A fine, bright copy. (#164628) (Inventory #: 164628)
$650.00 add to cart or Buy Direct from L.W. Currey
Share this item
L.W. Currey Inc.
Offered by

THE BEST OF FREDERIK POHL ..

New York and London : Harper & Brothers Publishers , 1908
(click for more details about THE SHADOW WORLD)
View all from this seller>