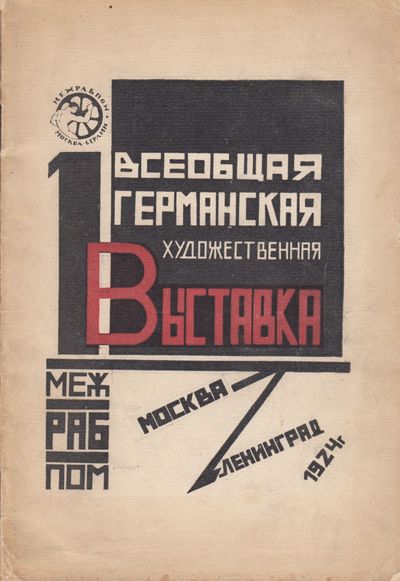 by Mezhrabpom (International Workers' Aid)
Moscow-Leningrad: Mezhrabpom, 1924. Octavo (22.4 Ã— 15.3 cm). Original staple-stitched pictorial wrappers; 36, [4] pp. Occasional contemporary annotations in pencil; light wear to lower spine extremity; else about very good. Catalog, with introductory articles and reproductions, published for the 1924 Moscow showing of the First German Art Exhibition in the USSR, which was jointly organized by the Soviet state and German artists residing in the Soviet Union, to benefit artists in need. It was shown in Moscow, Leningrad, and Saratov and contained a broad selection of works representing tendencies such as Expressionism, Abstract Expressionism, Cubism, and Realism. The catalog lists 501 works by artists including Willi Baumeister, Heinrich Zille, Ernst Fuchs, Emil Nolde, Oskar Nerlinger, Moholy-Nagy, Max Pechstein, Rudolf Belling, Oskar Kokoshka, KÃ¤the Kollwitz, Otto Dix, and many others. The exposure to such a wide range of leading German artists had a significant impact on the Russian avant-garde. Another catalog, without illustrations, was also published specifically for the Leningrad tour of the exhibition. The publisher, Mezhrabpom (an acronym for International Workers' Aid), was a German-Soviet organization formed to combat famine during the Civil War. During NEP, it helped fund and develop the burgeoning Soviet film industry and also continued in other ways to serve as a link between Germany and the USSR. One of 3000 copies. As of November 2019, KVK and OCLC show copies at the British Library, Tate, Metropolitan Museum, and the Getty. (Inventory #: 50332)
$1,500.00 add to cart or Buy Direct from
Bernett Penka Rare Books
Share this item

1856
(click for more details about Album englischer Landhaeuser, Villen, Cottagen &c)
View all from this seller>