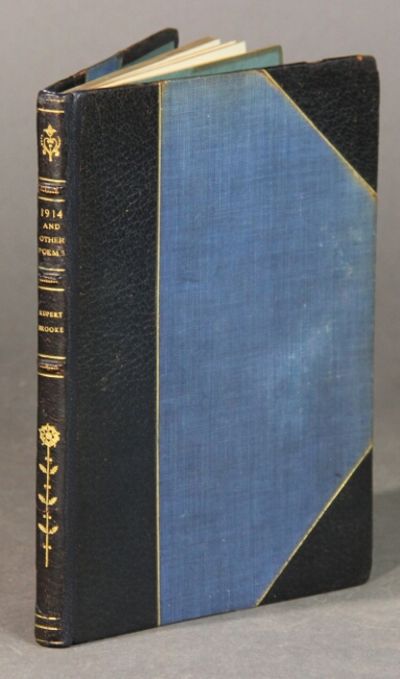 by Brooke, Rupert
Garden City, New York: Doubleday, Page & Co, 1915. First American (copyright) edition, 8vo, pp. [12], 11-63, [1]; contemporary three-quarter blue morocco by Stikeman, gilt lettered direct on gilt-decorated spine; neatly rebacked with old spine laid down; a very good copy. Bound in at the front is a printed leaf from the publisher which states that this is a "Unique first edition of Rupert Brooke's Poems issued by Doubleday, Page & Co. in anticipation of getting the American publication rights Messrs. John Lane & Co. obtaining same from Mr. Brooke's executors this edition was not regularly issued eighty-seven copies were printed." After the London publication in 1915 of 1000 copies, Doubleday, Page & Co. set up and printed 87 copies in anticipation of being awarded publication rights. The rights actually went to John Lane Company and this edition was never formally published. (Inventory #: 54473)
$1,725.00 add to cart or Buy Direct from
rulon-miller books
Share this item

Portland, Oregon : David Steel , 1889
(click for more details about Hymns in the Chinook jargon language. Second edition revised and enlarged)
View all from this seller>