1855 and 1856 ALS from California to his brother in Naperville, Illinois 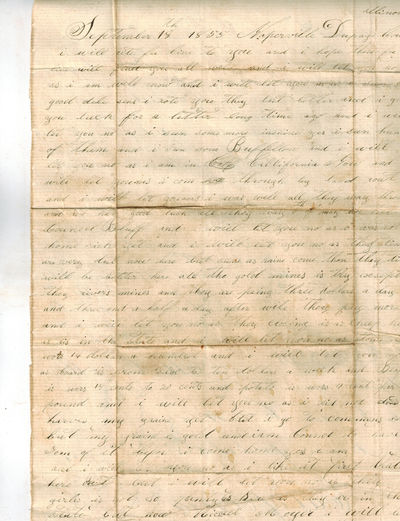 by California, Gold Rush ) Moyer, George to his brother Michael Moyer
Sacramento, California , 1855. Two manuscript letters in ink, both on ruled paper with folding creases, the 1855 letter 8" x 12 1/2", with single spaced writing both sides, approx. 500 words. The 1856 letter 15" x 10", folded in half to make 4 pp., approx. 300 words, with small blindstamp top left corner depicting an eagle. The earlier letter is headed "September 18th 1855 Naperville Dupage County Illinois" and ends "Michael direct your letters Nevada County, Nevada post office, California". George writes to his brother Michael in Naperville that he has "seen a good dele sins i rote you they last letter", including a hundred "inshins" and some "Buffellow". He adds that "we had good luck all they way of may we left Council Bluff", and that he is not home sick yet. He then talks of the gold mines, river mining, what they are paying, and the cost of things such as board ("from five to ten dollars a week"), "Beaf" ("wors 15 to 20 cents"), and "potato" ( "4 cent per pound"). He adds that he intends to have some gold before he comes home and that "girls are not so plenty here as they are in state". He closes by asking his brother to write him and to remain at home in Illinois to care for their parents. The 1856 letter, headed Sacramento august 3th 1856, informs his brother that he is well and "down to Sacramento now" working on a farm feeding a "schrasing" (thrashing) machine and that "they times is verry hard in California now". He adds that he had some money "stole" while he was in the mountains, but since coming down into the valley he was making money and will send some home soon. The letter ends with George wishing to see them all soon and that he is not home sick. The third page of the letter bears a drawing of a wing or leaf, eleven smaller versions of the same image interspersed on page 2. A fascinating testimonial on California during the gold rush, written in a strong hand and in a wonderful vernacular style by a good observer. . HOLOGRAPH LETTER SIGNED. Manuscript. Very Good. (Inventory #: 007164)
$800.00 add to cart Available from
Dale Steffey Books
Share this item
Dale Steffey Books
Offered by

Any book is returnable for any reason within 10 days for a complete refund, as long as it is returned in the same condition as when received. Please notify in advance of return. I accept checks, money orders, Mastercard, Visa, and bank wire transfer.
More from this seller

On Death and Dying

New York : The Macmillan Co, , 1969
(click for more details about On Death and Dying)

Studies in the History of Mediaeval Science

Cambridge, MA : Harvard Univ Press , 1924
(click for more details about Studies in the History of Mediaeval Science)
View all from this seller>