ARTHUR FIEDLER: MUSIC FOR THE MILLIONS. THE STORY OF THE CONDUCTOR OF THE BOSTON POPS ORCHESTRA 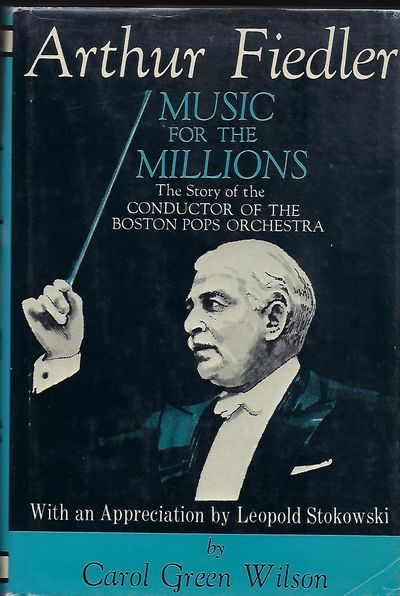 by WILSON, Carol Green
NY: Evans Publishing Company, 1968. First Edition. With an interesting signed presentation from Wilson on the front endpaper: "For Nedra Harrison Anargyros, whose college years were spent in the Boston of Arthur Fiedler- Affectionately Carol Green Wilson. San Francisco, February 14, 1975." An interesting association copy! Nedra (Florence) Harrison Anargyros worked as a Power's model in 1938 and was the original model for The Dragon Lady of Milton Canoff's Terry & the Pirates in 1939. She also posed for Salvador Dali for his painting "Madonna of the Sea." She rode the Quadrille on horseback for the first year of the New York World's Fair in the Wild West and Rodeo. She was also a licensed pilot and attended Emerson College in Boston from 1934 to 1936 and UC San Francisco in 1949. Nedra, who was fluent in seven or eight languages, served the Allied cause during World War II as an undercover agent with the OSS in Europe, Asia, and North and South America. She often was able to obtain valuable secrets by becoming the mistress of enemy officers and diplomats. She once escaped capture by shooting a Nazi officer whose mistress she had become a part of her spying mission. She was married for nearly 30 years to sculptor Spero Drosos Anargyros. 8vo., black cloth in dust jacket; 223 pages. With an Appreciation By Leopold Stokowski.. Very Good (covers nice; contents clean & tight); minor wear (few short tears) d/j. (Inventory #: 56158)
$75.00 add to cart or Buy Direct from Antic Hay Books
Share this item
Antic Hay Books
Offered by

Specializing in Autographs & Signed Books, Association Copies in all fields.

30 day return guarantee, with full refund including shipping costs for up to 10 days after delivery if an item arrives misdescribed or damaged.
More from this seller

THE SENATOR NEXT DOOR: A MEMOIR FROM THE HEARTLAND

NY : Henry Holt & Company , 2015
(click for more details about THE SENATOR NEXT DOOR: A MEMOIR FROM THE HEARTLAND)
View all from this seller>